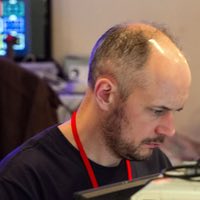 John Girvin is a Respawned 80s Game Developer who decided to misspend some more time in much the same way as he misspent much of his youth: making games.

Except this time not in 100% Assembly Language or on 8-bit home micros. Probably.

John created many free games for the 8-bit VIC-20 and Amstrad CPC systems, all of which are now unbelievably, sadly, and to his eternal pain and embarrassment, lost to time. They're real, honest, they just went to live on the special farm you can't visit. He also made a few Amiga games, which have survived.

After some time spent wandering, lost in the bleak post-Amiga wilderness, in 2014 John finally released a 21st century update for one of those old Amiga games, under the banner of Six Echo Studios. Atoms was well received and currently rates five stars on the App Store.

Now, in between other things, John continues to work on his games, and he'd really love for you to play them. G'wan!

Contact John at [email protected] or on social media below.